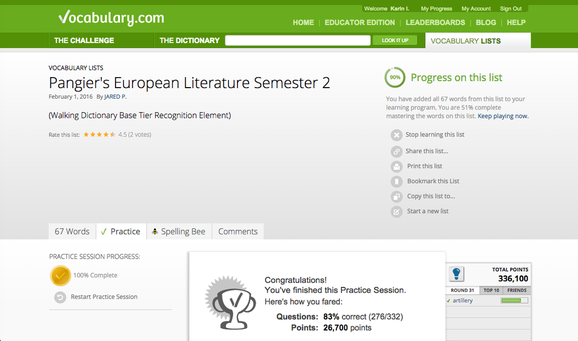 3 Want-to-Know Vocabulary:
patronizingly -“Patronizingly he gives the youngster a portion and he says…” (Remarque 36).
furtively - “They have dysentery; furtively many of them display the blood-stained tails of their shirts” (Remarque 190).
unimpeachable - “They are square, neat boxes with wooden sides all round, and have unimpeachably satisfactory seats” (Remarque 7).
1. annihilation: destruction by obliterating something
“We do not fight, we defend ourselves against annihilation” (Remarque 113).
SA: The Fukushima nuclear power plant was annihilated five years ago.
FW Q4 SHORT STORY: It felt like his whole life was annihilated instantly.

2. banal: repeated too often; overfamiliar through overuse
“If one wants to appraise it, it is at once heroic and banal - but who wants to do that?” (Remarque 272).
SA: Some of the words that Donald Trump uses in his speech are banal.
FW Q4 #2: Although this is banal in this free writing assignment, we understand that Matthew and his siblings have been living with Nikki for too long now, as they finally realize that she is crazy.

3. belabor: attack verbally with harsh criticism
“We sit as though in a boiler that is being belaboured from without all sides” (Remarque 111).
SA: The debater belaboured the opponent's argumentative statement.
FW Q4 #2: Murdoch is a man that Matthew saw at a convenience store, who defending a young boy that was belabored by his father.
HONORS SHORT STORY: “Fools, I will drink to your death with your bones!” The Demon belabored.

4. convulse: move or stir about violently
“...feel how the body suddenly convulses, then becomes limp” (Remarque 216).
SA: The chef convulses the huge pot of soup.
FW Q4 SHORT STORY: She would suddenly take a knife, convulsing it in from of Luke’s face.

5. docile: easily handled or managed
“They listen, they are docile-but when it begins again...” (Remarque 134).
SA: The group of students were well behaved and docile.
FW Q4 SHORT STORY: She wasn’t exactly a docile person.

6. foreboding: a feeling of evil to come
“Our forebodings increase as rum is served out” (Remarque 103).
SA: The girl walked through the dark forest, despite her foreboding.
FW Q4 SHORT STORY: This never occurred to Luke as weird or foreboding.

7. furtive: secret and sly or sordid
“They have dysentery; furtively many of them display the blood-stained tails of their shirts” (Remarque 190).
SA: The spy furtively sneaked behind the desk.
HIS READS: You furtively sneak into the kitchen, take a piece of cookie and run back to your room.

8. gape: look with amazement
“Before me gapes the shell-hole” (Remarque 67).
SA: The little boy gaped at his parents when he was told they were going to Disneyland.
FW Q4 SHORT STORY: Luke jostled through the crowded school hallway, as students gaped at him.
HONORS SHORT STORY: Karin gaped at Jun’s bloody shoulder, and without a single word spilling out of their mouths, the siblings carried Jun back home.

9. ghastly: shockingly repellent; inspiring horror
“He looks ghastly, yellow and wan” (Remarque 14).
SA: The March 11th earthquake was one of many ghastly tragedies.
FW Q4 SHORT STORY: But soon enough he realized they were staring at the ghastly bruise on his face.

11. indignation: a feeling of righteous anger
“Three quarters of his vocabulary is derived from these regions, and they give an intimate flavour to expressions of his greatest joy as well as of his deepest indignation” (Remarque 8).
SA: He tried very hard to keep his indignation from bursting.
FW Q4 #2: Despite the outcome of Matthew’s indignation, his actions show how he is willing to make changes for the better.

14. laconic: brief and to the point
“‘How does the cow-shit come on the roof?’ retorts Müller laconically, and turns to Haie Westhus again” (Remarque 78).
SA: I hope to write a laconic essay on the AP Literature exam.
FW Q4 #2: Laconically, Murdoch teams up with Matthew, Matthew’s father and Aunt to plot against Nikki.

16. nourish: provide with sustenance
“Monotonously the lorries sway, monotonously come the calls, monotonously falls the rain” (Remarque 74).
SA: The baby was nourished with milk.
HONORS SHORT STORY: They left him to sleep after nourishing and aiding his shoulder.

17. obliquely: to toward or at one side
“The next throw whizzes obliquely over to the corner” (Remarque 177).
SA: The tennis ball is hit obliquely to the other side.
FW Q4 SHORT STORY: A boy obliquely stepped away when Luke approached the boy, unaware that he was in the way of Luke’s locker.

18. patronizing: characteristic of those who treat others with arrogance
“Patronizingly he gives the youngster a portion and he says…” (Remarque 36).
SA: She patronizingly throws the book at him.
FW Q4 SHORT STORY: Matthew is now extremely tired of Nikki’s patronizing character.

19. peculiar: beyond or deviating from the usual or expected
“I’d been struck by the peculiarity of the man...” (Hesse 10).
SA: The peculiar sound caught her attention.
FW Q4 SHORT STORY: Perhaps it was his peculiar choice of clothing, or his messy bed hair.
FW Q4 #6: Despite the fact that she is quite peculiar and is the youngest in the family.

20. shrewd: marked by practical hardheaded intelligence
“And finally Stanislaus Katczinsky, the leader of our group shrewd, cunning and hard-bitten” (Remarque 3).
SA: The company is successful thanks to the shrewd workers.
FW Q4 SHORT STORY: Ed was a tall man who can be described as shrewd and rather wealthy.